We decided to split the interview into two parts. The first part is dedicated to Final Fantasy X/X-2 HD Remaster and the second part to Lightning Returns: Final Fantasy XIII.

The interview was in English and then translated to Japanese.

Do you see Snow as the new Don Corneo from Lightning Returns ?

Don Corneo is a bit of mafia boss and he was quite baddy. He was not a really nice guy. Snow, in Lightning Returns, is a big boss but he controls a lot of commodities because he’s Yusnaan mayor. He’s a top man. He works very hard to make sure that other staff distribute fairly to other people who need it but he’s not a bad person.

Does Lightning Returns offer more challenges to the players than the previous episodes of FFXIII, such as the different Boss in the Coliseum of FFXIII-2?

In Lightning Returns, there are contents designed for cool gamers, experienced gamers. About what you can see in game, there are some dungeons but in order to enter, you have to meet some condition first. That is quite difficult itself. When you will enter to the dungeon, you will see that you have to be very good, be very skilled.

After the release of Lightning Returns, will you join and help Nomura-san’s team for FFXV or will you begin to think about a whole new Final Fantasy?

Many people haven’t made up their mind yet. CGI designers team for example will be transferred to FFXV team so they will work in the FFXV team. But people like game designers, programmers, their future is still blank. They may actually contribute to FFXV project but we don’t know yet.

Caius is considered as one the most and badass character from the Final Fantasy saga, will we see him again in Lightning Returns ?

Can you please tell us more about the social and online features of the game?

Remember in XIII-2, you can upload your IG progress on Facebook. We decided to take another step further. In LR, you can take screenshot of your game play and you can upload it directly from your console to Facebook or Twitter. That’s one thing. And another key feature in the game is how to dress up Lightning. You can give a different outfit, change color, and give a different combination of accessories so you can create your own version of Lightning. You can capture and upload it on social network. Also you can check your friend’s game play as well. They will appear in game as NPC. Talk to them and you can find out what they have posted on their game. And there is another thing which is very interesting. You will be also able to exchange items with a friend via SMS or Social Network but it is difficult to explain without actual gameplay to show. So please stay connected for more information.

We recently met sir Hideo Baba, producer of the Tales series, and he said he admires the Final Fantasy series a lot. How about you, what is your feeling towards competing JRPGs?

We’re excited to be here at Japan Expo. Japan Expo is obviously about Japanese cultures and their games. So we can see a lot of Japanese games being introduced and talk about. Last month we were at Los Angeles for E3 but we also visited E3 almost every year and several years ago, I think JRPG game presented wasn’t the main thing than this year. There were fewer games to talk about. Rather than competing, we’re hand-in-hand in order to come back to the main stage again. Other than that, if we release our game on the same release window, obviously there is some challenge and some competition. But otherwise we’re all part of the same culture.

The Lightning Saga is reaching its end. What are your biggest satisfactions and regrets?

It’s our first experience to produce a trilogy on the same generation console. So that is an achievement. Now I think that about the fact that Lightning has been so popular so we were very excited and happy about that.

We haven’t a lot of regrets because, we had to produce 3 games in a short specific time but if you put all three developments together, it was quite difficult to keep it up. So I think it was very hard for the staff so a big challenge.

Lightning Returns will close the Lightning Saga. Can we suppose that there will be a link between the saga and FFXV since both of them are a part of Fabula Nova Crystallis?

Maybe you can ask the same question to Nomura-san directly. As you may know, Lightning Returns and FFXV share the same mythology so in that sense, yes. The concept is the same. However the characters and the world (Gran Pulse, Cocoon, Nova Chrysalia) from Lightning Returns will not appear in FFXV. Some of gods and goddesses might be shared in FFXV.

We can see Lightning wearing Cloud's suit in Lightning Returns, could we see her using special abilities related to her suits, like Omnislash?

Omnislash won’t be featured. However, there will be some Cloud-like abilities that Lightning will use. Also, if you watched the video, you probably notice when she won a battle the victory fanfare from FFVII when she’s wearing Cloud’s costume. And also what she says, her spoken line in the end of a combat, will not be Cloud speaking but kind of something that Cloud would say. That’s the connection between these two characters.

Finally, have you been inspired by our drawing about Lightning wearing Cloud's soldier first class suit ?

Yes, you presented an artwork last time we met at our Europe Tour. There was a time we have to decide about what kind of costume we have to prepare for Lightning for this game. Because of the illustration you presented, we have confirmed that fans would love to see her in Cloud costume so it helped us to make the decision.

We came over to Europe after the Tour, other footages were shown to all the team members, the development staff. Also we uploaded your illustration in an internal website as well so we shared all the information we experienced and people could express what they think. 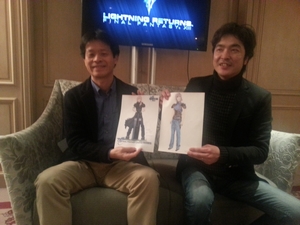 Can you please tell us more about the Coliseum in Lightning Returns?

In XIII-2, Colosseum was for DLC. But in LR, it’s a feature included in the main game. You can visit it in Yusnaan. There is also an area you can fight against monsters . Other than a location, it is a part of a quest. 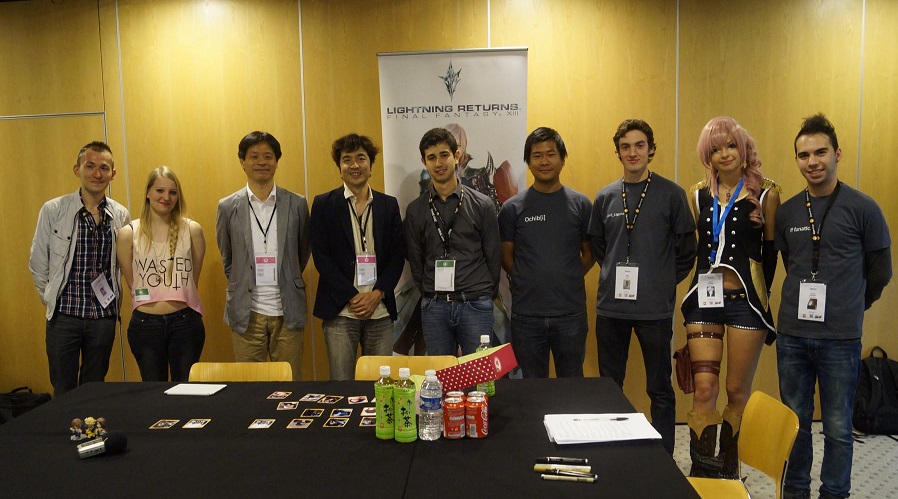 We would like to thank wholeheartedly the staff of Square Enix Japan, Square Enix Europe and Square Enix France for allowing and organizing this interview with patience and kindness.