One day before the big show Distant Worlds in Paris, thanks to La Fée Sauvage, we had the big honor of meeting again Arnie Roth and Nobuo Uematsu for an exclusive interview.

These two big artists talk with us about their inspirations and their way of working with much kindness!

Mr Roth, could you tell us more about the process of arranging of the musics?

Roth: You will divide that into two parts. One part is the pieces that existed after data went to sixteen bit and they used recorded audio in video games, so at that point you actually have recorded music tracks for video games after 1995/1996 something like that. So you have rock bands, chorus, orchestra, solo instrumental, vocals... So if you have the recorded music and actual scores for that, then there is all the material that was done in 8 bit and that requires more orchestration arranging -obviously- so between those two there are different processes I think.

With Distant Worlds, if we are trying to stay very close to the way it was originally released in the game, then those things that were already recorded, we're simply trying to recreate that as close to that release as possible. Now sometimes it involves extending the material, because we are short, or we are putting it together in a medley with other items or that kind of development, but we are trying to stay very true to the setting that’s there. If it’s a process of orchestration, for instance if it was a rock band and now we want to perform it with orchestra then that’s another process and it’s a fairly involving process. You have to start making decisions about how you are going to represent the rhythmic drive of the piece, are you going to do that by... in some cases we do it with the obvious elements, some precaution basis, some out of the orchestra. Other times we want to create that rhythmic drive a different way and in a better way, for instance strings digging in on a rhythm, a large strings section digging in. (He sings the introduction of One-Winged Angel.) You know, that kind of thing can be very rhythmically propulsive.

So we do different techniques of orchestration. Low brass playing that or little colors in the woodwinds or little rhythmic things. So there is many decisions like that, you make decisions about the melody whether we want to move them from the woodwinds to the first violin section to maybe a solo trumpet, that kind of thing.

Orchestration sometimes is a very completely different project than arrangement. Sometimes arrangement is putting together the very sections on structure of the piece you are going to put together for the concert and then you hand it off to an orchestrator and he expands it out and there is a tremendous work and, that segment actually, it was a rock band and now it’s going to be full symphony orchestra and choirs, you know.

So to pick process, in some ways maybe the 8 bit is almost easier in some ways, because it’s simpler. We are dealing with three voices on the computer chip. It’s an easier process I think to say. I mean the more remarkable one for instance is the opera from Final Fantasy 6 which we will do here in Paris. If you have seen it in the game, just the lyrics pop up in the bubbles and you know it’s just the voice. But if you listen to the version of the opera that we do now, it’s very similar, it’s exactly the same, you know, amazingly, to me anyhow. So it’s possible to do that, it’s almost easier I think in many ways than -for instance- taking a rock band already recorded and moving it to full orchestra. Sometimes that works really well and another times it feels more like, oh I don’t know... music light, kind of thing you know what I mean, we are missing the back beat onto it, like we would like more of that or, you know, some time. So it’s an interesting process.

Uematsu-san, when you have to create the soundtrack of a video game, what are the keys given to you ? Do you know at this time all about the plot and the universe of the game ?

Uematsu: I only need illustrations/artworks and storyboards. With just these two elements I manage to completely compose the music.

Mr Roth, A New World: intimate music from Final Fantasy came into Europe last month with its premiere in London. Do you plan to bring these intimate events in other countries? In France for example?

Roth: Yes definitely! Well, we’re in dialogues now about that. We’ve just announced, let ‘s see, six concerts in North America of Intimate, starting in May and ending in August and we will be announcing some concerts in Europe as  well.

The interesting thing about that it’s a different experience than Distant Worlds obviously it’s... we wanted to be able to perform smaller venues, in a more personal, intimate relationship with the audience actually in the concerts. Most people are familiar with chamber music concerts and recitals and we think there is a very good focus on the music this way.
We specifically tried to develop it with different repertoire from Distant Worlds so almost all of the pieces that were performing there are different from Distant Worlds and yet very popular ones, ones that we would like very much to do in Distant Worlds as well but this gives us another platform to be able to.

We think there is lots of places that can't put together, you know, one hundred musicians on stage and video and it’s a very big production, Distant Worlds. So in five hundred seat venues capacities, we think that there is definitely a place for that, under one thousand seats and we are seeing a lot of acceptance already around the world for this kind of things.

Sometimes conventions, sometimes universities, sometimes small groups from an art center, things like that, but there are Final Fantasy fans in so many of these places and if we can't bring Distant Worlds to a particular location this is a much more flexible easy way to bringing it I think.

Uematsu-san, your concert in Paris in November 2012 with the presence of Yoshitaka Hirota and Tsutomu Narita was a huge success. Have you ever thought about doing this experience again?

Uematsu-san, your music's arrangements receive a huge success. What do you think about remixes of your own creations?

Uematsu : First of all, I am very happy but actually it's especially my mom who is very happy. What I love so much is that many high skilled people like Arnie Roth worked on my creations and managed to enhance them. It's especially this aspect that gives me extreme pleasure.

Mr Roth, aside Distant Worlds and A New World do you have other projects you are working on lately?

Roth: Yes, yes. There is many, I don’t know actually where to begin with all of them, I mean some of them involves individual artists that I work with. People like Peter Cetera, Jewel, a group called Five For Fighting we are doing some concerts with.

We do a lot of orchestration and arrangements so we are working with a lot of those people as well -my company AWR music. I don’t have time to go and conduct to all of those. Eric is actually conducting some of those. But there are things like that going on, we are also looking at some additional video game music concerts, developing new project for next year, different... I can’t really speak about it very much yet but certainly we want to bring it to Paris as well, sure.

But I think Intimate will probably come here sooner, I think within the next year. Now, Intimate is interesting because we are able to do more different things, you know. We can bring in if we want to -for instance- a month before the concert, change our repertoire and add something else or feature a new release or we find out about performer that we're able to work with and we can feature them in some way, we can still do a quick arrangement and we do that so it’s nice to have the flexibility with that. So I think I’m excited about that.

Uematsu: I want some music from Celtic Moon.

Roth:  Celtic moon, yeah we should do that. I wish (laugh).

When you start the production of a musical creation, do you approach the task with the melody part or the rhythmical part?

One of our team members studies music and would like to know more about Mr Uematsu's process in composing.

I will tell you a slice of my life. Every morning, I get up at 5AM and I start to compose from 5AM to 8AM. I compose with my right hand and I try to find arrangements primarily with my left hand. That's the way I work. Next, I don't really do anything special on the afternoon. I'm just having fun while I'm working.

Mr Roth, how do you select the musics for the different concerts throughout the world ?

Roth: That’s actually an interesting process. Sometimes it’s a little more obvious. The first time we are coming to a new city it’s a little bit more obvious about we have to present some of the really popular best-of. I mean that’s more an easy decision, but when we come back a second or third time now it become more difficult.
First of all there is the practical question. Do we have a good chorus? Do we have soloists?

Nobuo: Do we have Susan? (laugh)

Roth: All those considerations, you know: what personnel we have, how many rehearsals do we have: so that I know how difficult the program we can put together and which orchestra, which chorus... I know their abilities many times in advance so I know what we can do with two rehearsals versus three, versus four. Are we doing two programs, are they two different programs or repeat the same.

Lot of factors like that, then there is the factor of what was released in Europe? When? You know what of the new releases that are coming out, those kind of things.

Sometimes we come to some cities, I can’t get either a guitar or a soloist, so we will be able to do Vamo alla flamenco here in Paris for the first time and Dear Friend from Final Fantasy 5. Other cities we don’t have guitarist, so we don’t those pieces, we do something else and then another consideration is looking at the 25 years of Final Fantasy and are we representing it well? Are we too heavily programmed in one area or another so I look at all of those. There is so many factors to consider.

Nobuo: Do we play Opera? New one?

Interview realized by Toulal and Sheron974 for Finaland.

Thanks a million to Arnie Roth and Nobuo Uematsu for their availability and for answering all of our questions, and thank you to the La Fée Sauvage staff for their great work and this great opportunity they gave to us! 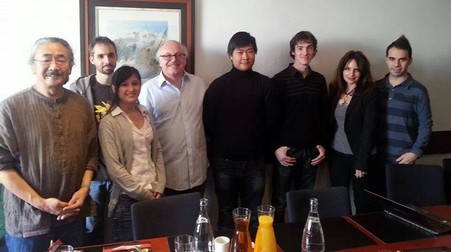