At Japan Expo, Square Enix decided to think big for the next Dragon Quest. A booth was available for players who wants to try the game and they could also win a special T-shirt by beating the boss in the available demo. Yuji Horii (creator of Dragon Quest), Ryota Aomi (Producer) and Kenichi Osugawara (Producer at Koei Tecmo) came to Paris for this event and we had a chance to get an interview with them. Please enjoy !

Finaland : First, thank you for coming to Japan Expo and receiving us for this interview

Thank you for coming too, this is great !

Finaland : What are the differences between DQ Heroes and other musou ( « Warriors » ) games (One Piece Pirate Warriors, Zelda musou (Hyrule Warriors)) ?

Kenichi Osugawara : Well, I think the biggest differences between DQ Heroes and the Musou series is that in Musou all the action is structured, we’re fighting in a battlefield and it’s all about how you win that one fight, as the battle series is all about combat, where DQ Heroes is an Action RPG, it’s pretty much more like an RPG game in some ways, but you got characters, you got individual levels, they do things depending on the story of the game. So depending on the story we’ll have different objectives. They got to do different things and motivations, since the construction is based much more on what you do for the story rather than how you just win one battle, so the whole idea is there are differences in just how it’s constructed.

Ryota Aomi : What we tried to do in DQ Heroes, we didn’t make it as a Musou game as the Dynasty Warriors games, it’s pretty much like a DQ game instead, it’s kinda about avoid making an action game, so it does not become a Musou game. The way the game came, it was about 10 years ago. I think it was at the E3 show, and they discussed various ideas over time, and about  3 years ago, they came to the proposal asking  «  could they make a Dragon Quest action game ? », while making it as a Dragon Quest game rather than a Musou game. So that’s how the series came about.

Finaland : How did the partnership between Omega Force and Square Enix go ?

Kenichi Osugawara : As a company, we chose Square Enix for making the Dragon Quest game, to do special things, and we were really happy to do that. It’s such a real opportunity, but at the same time there were big responsibilities for us as well to get it right. There are so many people who love Dragon Quest, so it wasn’t difficult to find people who are really big Dragon Quest fans to work on the game, but the way we handled it, we discussed everything with the Square Enix guys, we had a very good partnership going on, and I think they could take it very well.

Yuji Horii : I think we’ll be able soon to answer that, but not now. But we want to make a DQ Heroes II for PS4, so the very least next Heroes game will be for PS4.

Finaland : This is the 2nd time you come here in Japan Expo, how do you feel about french fans ?

Yuji Horii : I’m very pleased that French people and fans love Japanese culture and stuff, so I’m very happy to see that. We just went out of the car, and we saw many people cosplaying, it’s just great to see. The way they may go out their home and go back in these very costumes is surprising.

Finaland : A second episode of DQ Heroes was announced recently, will web e lucky enough to see the game coming faster than the first one which needed 8 months to arrive to our countries? Will it have a multiplayer mode ?

Yuji Horii : Translating a game like DQ takes quite a while, cause we have to focus on how the characters speak and how they should be, then translating all that stuff in English, French, Spanish, Italian and German, it’s just not possible to do it in a short amount of time, but having said that, we will make sure that the next game will come out in Europe and USA a lot quicker than the first one, since we have the technologies we can now do it a lot quicker.

Finaland : When I think about DQ, I think about story, but also music from Koichi Sugiyama, so will be Theathrythm DQ will be launched in Europe ?

Yuji Horii : (laugh) We’re not sure what the plans are with that...

Finaland : As far as I know, DQ VII and DQ VIII are very popular, a lot of people, and when I mean a lot, it’s A LOT, ask for localizing them in Europe for 3DS

Yuji Horii : (laugh) I do understand that, but it’s not planned for now. Don’t worry, people desires arrive to my desk and we’ll decide what we do

Finaland : Why did you chose to release DQ Heroes on a Sony console rather than the usual Nintendo console ?

Yuji Horii : We didn’t just allow the games to be released on Nintendo platforms, like particularly favoring Nintendo in any ways, it’s just that the games were better developed for Nintendo consoles over time,  but with DQ Heroes, we thought about that many things we wanted to do with the game, the functionalities we wanted in the game, and we think that like the other games based on the Musou series ideas, it will work better for Playstation games, so that’s why we decide because it’s the kind of game we want to make, to release it on Playstation.

Finaland : (Fat Chocobo) I never played DQ, because of my parents that were against video games. If I had to try and chose one from the main series, not spin offs, which one should I buy first ?

Yuji Horii : Actually you could begin with DQ IV, which is a good one to begin the series, as you begin with a single character and it’s better for merging in the story, so I think DQIV is a good one to introduce you to DQ. Then when you got used to IV, you could go for DQV, it’s another very good one.

Finaland : (Fat Chocobo) Thank you for your advice !

Finaland : Dragon Quest is really popular in Japan, but in Europe it takes time for the series to find its fanbase, how do you explain that ?

Yuji Horii : I think one reason might be the history of the company, and with Enix merging with Squaresoft, launching FF games that spread a lot faster than DQ that would be one reason, and another might be, I’m very concerned and quite strict about the languages, and how the DQ fans would be lost if we don’t release in every language, so it takes time and subsequently we release games much less frequently than others, or in greater intervals, making DQ « disappear » for a while.

Finaland : We are a FF fansite, so if you had to choose one or several elements from FF, which ones would you be taking ?

Yuji Horii : I’m a real fan also of FF, I see it as a great rival, and we won’t be speaking of stealing their ideas, even if there’s a lot in common with how DQ is developed. I really like FFX, because it was the first with voices, I think these voices are a major point of the game. And I really like FFXII as well, really good in the way the game was structured. There are similarities with DQ once again, like the teleport spells, which allows to jump anywhere on the map, so it’s very easy and pleasant to play with that kind of features.

Finaland : (Sheron974) I play DQ, and it always keep the same names, for magic, equipments etc. Why did you chose to keep, for each episode, the same names, every time ?

Yuji Horii : It’s because of the new players, so they don’t have to learn each time a new list of spells to make it easier, that’s why we didn’t change the basic grammar from the gameplay,  and personally, when I play games I never read the manuals, I’m just gonna playing with it, so I just want to make DQ a game that players will understand straight away from the first time they play, immediately.

Finaland : Aside of Dragon Quest, is there a new type of game you wanna make ?

Yuji Horii : «  Morpheus » games (ed. VR) ? Anyway it would be great. From the main DQ series it would be difficult to do, but a spinoff is something we really want to do.

Finaland : Thank you for the interview and we hope you will spend a pleasant time at Japan Expo !

A big thanks to Square Enix for making possible this interview ! 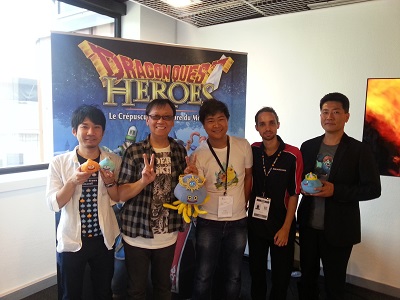